I’ve finally begun watching HBO’s rendition of George RR Martin’s “Game of Thrones” and, well, it’s quite spot on isn’t it? I’ve been abstinent only because I wanted to be done turning the pages of the story first, prior to hunching over a screen every night, devouring a TV dinner per episode.
When I finished reading the last volume today, on my way to work, I found that riding the metro back home almost felt somewhat lonely, like I was suddenly missing my gang of friends and their company. The hollowness of not having Jon, Jaime, Tyrion and Dany’s lives play out in front of you anymore was palpable.

Attn: Martin! Do hurry up please, with your building of this large “cathedral”. Don’t let any video game playing pry you away this time from your ongoing creative construction. We here are still starving, fasting, and dreaming of the day when you serve the next course of your narrative feast.

When readers turn their cloaks to become viewers there’s always a friction of expectations. Whoever said expectations are the root of all heartache should receive honorary fealty for his/her flash of wisdom. Tis true indeed.

The HBO “Game of Thrones” TV Series is one of those rare concoctions that doesn’t shy too far away from the original mark. Remember how ‘The Lord of the Rings’ did Tolkien justice? And also how Warner Bros’ ‘Harry Potter and the Deathly Hallows’ was relentlessly loyal to Rowling’s written ink? Well, thank God for HBO in its applaud worthy effort to stay true to the books’ eye-popping, neck-severing, mind-cracking raunchiness, gore, sex and more.
I’m still on Season 1 Episode 8, and given that I’m finical, critical, cynical and superficial, you won’t find me positively raving about everything till the Winter do cometh. Instead, while Autumn is still with us, here’s what I think of the HBO cast whose sole aims are to bring forth to life the palette of characters that reside in Martin’s bloodily addictive, richly painted fantasy realm of throne wearers and seekers.
Ned Stark: good; could be colder, given that his loveable iciness seems to be melting by as early as the end of the pilot episode.
Catelyn Tully: near perfect mimesis, yes? She almost seems more likable on-screen. 9/10.
Bran Stark: PERFECT!!! One’s imagination incarnated by HBO. 10/10.
Arya Stark: is very cute—but that’s not exactly right. She’s good, but looks a bit better than she should, for a “horse face” looking “Underfoot” that is. Go on, bite your lip a bit more. Maisie Williams is a very promising actress.
Khal Drogo: thought he would be bigger, but as you will find with Tyrion, he grows on you very fast, and now I wouldn’t have him any other way. Whoever does his dark shadow sunken eyes: applause to you and your makeup. There’s a seductive hunger in his eyes, like he can devour your lustful soul with a single look.
Illyrio Mopatis: should be fatter, like a sea elephant that blubbers with opulence.
King Joffrey: is also almost perfect with just the right amount of gross. This will serve him well when his time comes to induce all that hate.
King Robert: is okay. Nothing great but nothing too bad either, the hearty laughs work well.
Jon Snow: is somewhat disappointing, because in the books he is sharp, handsome and smart, while the one in the movies is accented, slow and just…there. (11/4/2013 Update: Season 3, Episode 2) – Jon Snow (Kit Harington) is now growing on me; I like him. The human mind is fickle isn’t it.
Rob Stark: my God did someone get casting right. Heartthrob in the making [Spoiler Alert! Don’t read the next line] thank God I know he dies, or I might have cried too, if ever I was the emotional type. 11/10.
Cersei Lannister: could be a bit hotter, but no, maybe I take that back, she is almost perfect as well.
Daenerys Targaryen: she grows on you, as is the case in the books, so spot on. Doing good Emilia Clarke. 9.5/10.
Sansa Stark: could be a bit prettier/hotter? But she seems to serve the right amount of annoying on our plates, so yes very good.
Renly Baratheon: is good, could be a bit more handsome as he is in the books. Why is he so explicitly gay though? In the book it is all implicit and never this raunchy. But given that Martin is a consultant backstage, working as a screen-writer, I guess they have their reasons.
Ser Loras Tyrell: WTF. Loras is a fantastic character in the books but the casting has gone cockeyed when they picked this blunder to play him. Neither as easy on the eyes as he should be, nor manly enough as he could be, this is not the true Ser Loras, the renownedly cocksure Knight of Flowers. I’m still in Season 1 Episode 8 at the time of this blog post, so I do hope Margery will be easier on the eyes and more hardening on the uhem for viewers. 3/10.
Jorah Mormont: spot on bear-licious. 9/10.

Tyrion Lannister: I was expecting a Gimli type character with an IQ of 130+ but the big screen version of Tyrion, played by Peter Dinklage, grows on you and becomes quite perfect too. Really does put everything into perspective when you see the dwarf in full perspective. 10/10.
Theon Greyjoy: looks almost despicably half Reek already. 9/10.
Gregor Clegane: needs to be taller and bigger. We needed a mountain, but instead we got a hill.
Sandor Clegane: is just right, yes? 8/10.
Tywin Lannister: is there something symbolic about him carving out that carcass in the opening scene of his entrance? Either way, quite good. 8.5/10.
Gendry: needs to look more like his father, aye?
Viserys Targaryen: could have been a bit madder, as if he were a chop off the old block from his father, but overall quite pleasing. There is more sympathy evoked on the pixeled screen for him, than on the off-white page.
Varys: is he supposed to be that plump? Should be a bit more powdery, but quite good. 7/10.
Littlefinger:perfect. Looks good too, better than in the books though, haha. 10/10.
Benjen Stark: looks like a runaway band member from Aerosmith. Average casting for an above and beyond character in the books, who is always at the periphery of reach like some mythical, yet elusive, guardian of the Wall.  5/10.
Doreah: hot. Damn. 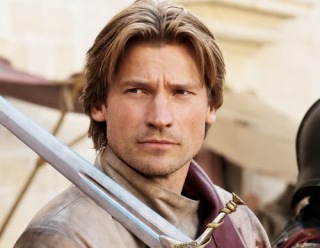 Jaime Lannister: a heartbeats doubt stabbed at first sight, but then evolved into perfection. Looking forward to see if he holds fast to the character development that Jaime is about to undergo as the story progresses. Jaime was always one my favourite characters – surprisingly, even before he started to change. 10/10.
Syrio Forel: a bit plump much? But no, quite satisfactory and lovable. I know you did not die in the books (if I read right) so I hope to see you again once more if the gods are good.
Bronn: could look more ferocious; wipe that smile off your face.
Osha: brilliant. Reminds me of Bellatrix or someone. Have we met before? (30 minutes later: Aha! Upon some research, just found out she acted as Tonks in HP! Of course I remember you now, knew it!)
Samwell Tarly:was skeptical at first, but once again one of those likable creepers that just grows on you. Quite fitting. 8.5/10.
Lysa Arryn: annoying enough, the git. Urgh.
Ser Barristan Selmy:perfect. 10/10.
Maester Aemon: smilingly creepily curious? I dunno, go figure.
Lord Commander Mormont: good.
Lancel Lannister: didn’t think he had to look so girlishly wimpy, but oh well. A lesser imitation of Jaime in the books, and an even lesser one for the HBO version.
Grand Maester Pycelle: why is his beard so short? It should cascade down to his waistline, and I don’t remember this douche being this annoying either, or so vocal, ever.
Robbin Arryn: urgh, pass. Good casting for an annoying unweaned wretch.

And that’s it for the moment folks! Anyone else I missed so far? I’ll keep you posted as the episodes move along (S1, E8 still), and I go on mourning the loss of no more new SOIAF books to read.

For now though, know that you know nothing. Very Socratic, I know. Adieu.