Now this movie was funny.

Not laugh-out-loud-every-second funny, but still very hilarious at its ripest moments. Fans of young Hollywood will find this movie refreshingly indulging, given that the comic star studded cast play, yes, themselves!

Now don’t get too excited, obviously, we get that they are all still actors doing what they do best, playing self caricatures. But still, it was a one of a kind tease of an invitation, and audiences would be happy if they they R.S.V.Pd yes to attending. To enter into a world where you brush your shoes on James Franco’s doormat, then walk in, mingle, take in his brand new boxy modernist Hollywood mansion, and be a part of one of his many house parties where attendants are of the like of Rihanna, Emma Watson and Jonah Hill—not what your average moviegoer is used to seeing. Then you hear that Channing Tatum is your neighbor six doors down, and see that the cast of ‘Super Bad’ are still out there snorting by the poolside and you wonder, are these really how the young stars of Hollywood party and live amongst one another, saying “party at Francos” and “oh, it’s just Rihanna singing in the kitchen”? The inner social circle of Hollywood where actors are each others’ mutual friends is too surreal to behold. It is made of the stuff which the tabloids only dream of capturing.

I must be living in a cave, because I hadn’t even seen the trailer for this movie. This was good because everything was a surprise, especially not knowing where on Earth, Heaven or Hell this movie was heading. Seth Rogan and Evan Goldberg (writers and directors) do a great job overall. It is very difficult to successfully execute comic-horror, and this was stellar. When needed, the suspense was just high enough to keep you on the edge of your seat, whether it was not knowing what was out there in the fiery orange haze of Franco’s neighborhood, or not knowing what to expect when about to be raped by a demon with a gigantic uhem*. The sudden scare scenes were shockingly unexpected as well. The first one in the beginning initiates the chaos and others are scattered through the movie with lava demons stalking prey. Even the woman in front of me jumped in her seat and shrieked louder than all of Craig Robinson’s altos.
All in all though, what carried the movie most was the chemistry of the men, and the banter between the egos of these actors. Though overly exaggerated, watching these actors pick at one another and verbally burn each other, hitting on common media headliners, was indeed a treat. It left you also wondering about the statement—a joke is usually made up of 75% truth. Yes, I think Seth Rogan really needs to display more breadth of character for his films without always being that guy; yes I didn’t even know who Jay Baruchel was, let alone his name, though to my credit I did at least recognize him as semi-famous long ago; yes, Franco be a nerdy writer/artist being picked out for his homoerotic taste of décor; Jonah Hill be thinking he’s “all that” post-Oscar season; Danny McBride be the annoying McBride, and Craig Robinson always gets a pass as just good ole fun Craig Robison. Michael Cera—yes, also true, we don’t care much about him, really. The chemistry between the boys (men) was familiar, and the comfort level made it all hilarious. Hill was excellent in his little passive-aggressive pretense, and group identified roles sunk in instantly, adding to the comedy. It is where Franco is the pretty boy; Rogan the clueless leader; Jay the voice of reason; Robinson the designated black guy; Hill the awkward secret plotter; and McBride the potential antagonist. 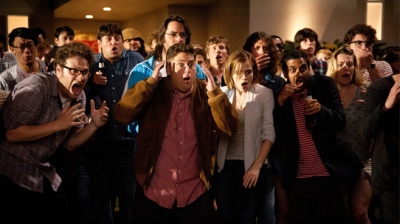 In Marketing 101 we learnt of the age-old branding strategy: Product Placement. This movie might just also make it into one of those very textbooks. When actors refer to certain brand names something about the references make these Hollywood names seem more real and relatable—that they are just like us! I think it was this that mainly fueled the desire for a laundry list of brand names. Be it Carl’s Jr., Nutella, Milkyway, In-N-Out, and the tens of other alcohol brands and drugs I couldn’t remember. In an interview in Australia, Rogan claims that Milyway might not even know that they were being mentioned like that in the movie, but come on, five film stars fighting over one candy bar? If that’s not good free publicity I don’t know what is.

And yet what also gives the movie another layer of depth is the surprising moral undercurrent of the story. It wasn’t preachy, but it was still there. In the end it left you feeling good about yourself and made you wonder, if even for a mili-second, about your own beliefs, beliefs about the “What If.” What if there truly is a God? What if everything that is said that would happen will happen? I found this utterly surprising, dreading they were going to be sarcastic in the end but they weren’t and this just made you smile. It is so rare today to find poular comedies that make it to the top which bring in this feel-good morality soaked in religious sentiment, in this case Biblical. The Book of Revelations determines Earth’s ending for this movie and all is well. [Skip these two next sentences: SPOILER ALERT] I also think the plot was realistic, because not all of the 5 make it to the Light. If I had it my way I would not have had Franco be left behind (you gotta love James Franco), but I guess the writers thought otherwise.

Overall, in the end ‘This Is the End’ deserves a solid 7.6. Well done. Adieu.

One thought on “This Is the End: Movie Review”