At first glimpse Perry’s latest video seems like a random collage of fantastical nonsense doesn’t it? Well, if that were truly the case I wouldn’t be writing now would I. This review is yet another one of my rescue articles (the premiere one being for Beyonce’s confusing the ‘Best Thing I Never Had’). It simply tells you the answer to that horrid brain itching question: “what does this even mean?” Don’t you just wish that all of life’s answers were this easy to find sometimes. Ah…so let’s start.

In actuality the video of “Wide Awake” is an intricately spun web of creativity which posits a complexly woven net of symbolic meaning. Wait what!? I mean…the song is doing a lot of interesting things all at once. 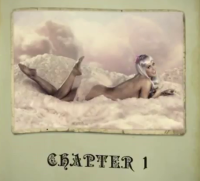 Katy Perry has experienced phenomenal successes with her two-year long “Teenage Dream” which even went on to have a re-release in early 2012 with three new hit singles. The first female artist to have 5 consecutive Billboard number 1’s from a single album and the second artist ever, behind Michael’s “Bad”, to achieve such a feat. In “Wide Awake” comes a certain closure for her album, her successes, and this erratic period of her life. Unlike some of her previous hits, or any common song on radio which generally has less than three objectives, “Wide Awake” is a dense concoction that wishes to accomplish:

• Paying homage to her past successes within “Teenage Dream”
• Creating successful autobiographical allusions to her own, very public, life experiences within the two-year time frame
• Teaching a lesson or conveying a valuable human experience to her fans and listeners
• Drawing itself up as the finale of a long saga
• The promotion her new upcoming movie: ‘Katy Perry: Part of Me’
• And staying true to a good pop song with easy simple lyrics and an infectious chorus 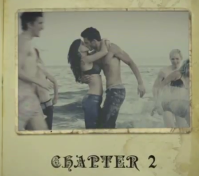 Unlike most music videos this one isn’t easy to get. It is a text that demands interpretation, and the reader needs to be equipped with a strong contextual knowledge to appreciate and understand its nuances. Otherwise, the end result will be simply goggling at the video with your mouth open like an O. It is when music videos like this come around that people like us get excited. The true meaning is dodgy and it needs to be pulled out by an interpretive set of pliers.
The video takes the fairy tale idyllic and drenches it in kind of sardonic realism that gives the whole piece a perceivable depth. It is this feature that sets it apart from that opening lollipop of a song—“California Gurls.” Though “Wide Awake” has color, it is constantly blotched with a darker palette that complements its dim overtones. At times the song sounds like a mix of her previous works, but one that is still doing something different. It is inspirational, like “Firework”, yet it is also longing like “E.T”. Described as the labyrinth of her life, the video reminds you of Snow White, Alice in Wonderland, and even Greek mythology. Though Perry lacks killer vocals, one of Perry’s biggest talents lies in injecting real emotion into her singing. This song is no exception.
Lyrics alone, the song has a plain meaning. The protagonist was on a high, Cloud 9 if you will, and this song talks about the crash. Wide awake from the crash the singer is reflective of the lessons learnt and to be learnt from the experience. If you want to read it autobiographically, Perry’s “Teenage Dream” success was her high, but with that famed success came many lows including her very public divorce to Russell Brand. 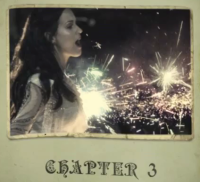 The video on the other hand does much more. I don’t remember the last time I saw a song that started with another song and ended with yet another song whilst sandwiching the actual song in the middle. “Wide Awake” pays tribute to 7 previous chapters of the album: “California Gurl”, “Teenage Dream”, “Firework”, “E.T”, “TGIF”, “The One That Got Away” and “Part of Me”. Something I’ve always admired about Perry’s work as an artist is her range and depth of performativity. She can be the peppermint dolly in California whilst still being able to pull off the jarhead badass fighting wars in Iraq (“Part of Me”). Each of her songs allow the listener to savor them when in different moods, whether it be when one feels like aspiring for a true utopian teenage love or one of those crazy, out of this world Friday nights that happen only once or twice in a lifetime.

“Wide Awake” opens with the filming of the ending scene of “California Gurls” which is symbolic of the beginning of “Teenage Dream” (since it was the first single). Perry then goes to her dressing room and removes her wig and this becomes her awakening. We shift into a labyrinth and Perry starts to lead us through. If you notice, you’ll see a caterpillar and a dried up wreath in the shape of a heart on the top of the stone wall. Very minute details but remember that every detail exists for a reason. The caterpillar is a motif for the ugly beginning because the rest of the video is all about transformed butterflies, while the dried up heart wreath is a symbol for unnourished love. Why the hell a labyrinth you may ask? Well, Perry wants this song to be complex and not much is more complex than getting yourself out of a labyrinth, right? Don’t believe me, go ask Theseus of Athens. Specifically, the use of the labyrinth is a device to visually depict the complexities and challenges Perry has had to undergo in her life, and each stage of the labyrinth showcases a different experience. 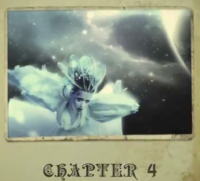 Next she walks through claustrophobic corridors in the form of tall stone walls that threaten to close in on her and sees a strawberry. WTF? Wait, I’m getting there. The strawberry is sweetened fame. When she eats it she is empowered. I see it as a falling like Eve eating the apple from the Garden of Eden. This does draw on that because the fame she imbibes is bitter sweet. The moment she bites it she is given supernatural powers, hence her ability to use cosmic energy to blast apart the closing in walls. Fame and success liberate her material hardships but soon, as we will see, fame comes with its own woes.

Soon after we see another one of those boob fireworks a reference to…yes you guessed it, the song “Firework.” The scene also oddly reminds me of a scene in the movie Harry Potter and the Goblet of Fire. Anyway, then we get the little girl. I don’t know how they did it but damn did they find the ideal little girl! Look at those eyes! Mini clone I tell you. The little girl represents Katy’s innocence and purity of love for music. Katy has repeatedly mentioned that in her darkest moments what helps her get through is a trip to one’s roots, her 9-year old innocent taintless desire for success before experiencing it. The girl is the personification of this empowering initial innocence. The two touch hands, another reference to a previous Chapter “The One That Got Away” since that song also deals with two Katies from different times.

Next the camera pans into a hall of mirrors and the pair walk hand in hand. The paparazzi effect is jabbed at here. Interestingly, the little girl is not reflected in the mirrors but only the adult Katy. The media spotlight refuses to reflect innocence because that just isn’t interesting. You know, one of the photographers has an uncanny resemblance to Freddy Krueger—just saying! 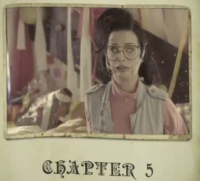 Fame and media harassment has its consequences. The floor holding the pair collapses and as a result we are pushed into a psychiatric ward-like corridor. Perry is twitching, very eerily I might add, the deathly sweet strawberry is in her hands and the little Katy is pushing her forward. This act resembles what I mentioned before, that Perry’s childhood innocence and her memory of it allows her to get through her struggles. Then we get those weirdly stupid looking minotaurs. I know I know, really! Yes, really. The use of the minotaur heads is referencing Greek mythology; I mean this is the labyrinth after all. But the clinical ward-like costumes they are wearing allows them to transcend into our world, meaning that even in our world we will run into various obstacles in unimaginable shapes. The young Perry demolishes them, liberating the older Perry, but the older Perry runs and grabs the younger Perry, taking her forward. They have a mutually definitive relationship. 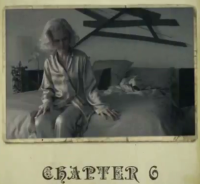 Then comes the best part. The teenage dream. We see a Prince Charming waiting for her, all is blossoming around her and everything looks perfectly summer bright. Yet, the song is about “I’m not blind anymore…” and Perry shows us this by sucker punching the air out of that good-looking, probably Abercrombie, model. What is sad is that this is reality. No longer does Perry urge her fans to gawk helplessly at the teenage dream. Here she is being realistic and critical of the possibility and plausibility of ideal love. The scene brings into mind “Part of Me” where she goes all military badass after being cheated on. Autobiographically, yes, it alludes to Russell Brand. That man looks nothing like a prince but to Perry he was her prince at one moment. While some critics wished that the prince in the video should have looked more like Brand, I beg to differ. Having such an obvious jab would have been very crass. This is class. Here, we all know she means Brand, and also it’s ironic because this man is an actual prince look-alike unlike Brand. 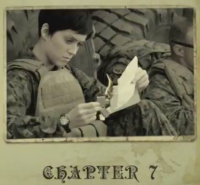 Upon conquering  the untrustworthy lover Perry finds the opening exit. The last scene reminds us of the “TGIF” neighborhood, and the explicit use of Katherine in the license plate reminds us of Kathy Beth Terry, that nerdy alter ego of Katy Perry. The song ends with the opening lines of “Teenage Dream” which is fitting since it is the end of the album “Teenage Dream”. But, you might ask, there was no reference to “E.T” so you’re wrong! Actually, there is a very subtle reference to “E.T” which I think is brilliant. You see it at 1:20. Katy’s eyes become luminous slits like the alien she was in “E.T”, very creepy yet still even more brilliant. Such detail in this video you’d be amazed at the things you can find. No I’m not jobless, I just pay attention.

The song closes with Katy’s return to the stage, also a promotional move for her upcoming movie. Why does it end with her return to the stage? I think it involves the desire of that childhood innocence. Right now, love didn’t prove to be what she thought it was but her abilities as an artist and her love for music seems to be a given constant to her. This is where she feels she needs to be, and I believe that is why she ends the song with her performing on stage. A place where she knows she is truly wide awake. Adieu.