My Friday night Movie Night turned out to be a truly satisfying experience, and “Black Panther” (2018) – the movie itself – was only part of why. I say that to be dramatic, just to open this post with a catch line, really! But no, in all honesty, the movie did play the biggest role of the night – but give a shout out to everything else man, because this spectacle comes with its own special entourage – the people, the significance, the culture, the timing, and the energy just augmented the whole viewing experience. At least it did on premiere night. You felt like you were part of something larger even before the reel starts spinning – and this is not that common.

Having decided to go for this movie and then finding out tickets were sold out by Wednesday everywhere (almost), my trusted friend Roshni found openings for us at The Uptown Theater in Cleveland Park, Washington D.C. Never having been to this place (I speak only for myself), my first glimpse of it made me freeze with glee. A quintessential, overly lit up movie theater too perfect-looking to exist in this day and age – kind of like the one Michael would walk out of in “Thriller” – awaited our forceful entry. Soon I found out that this was a historic single-screen movie theater (only one movie showing, in America really, these exist!) established in 1936. Our show was at 10:20 PM but knowing it was the premiere we arrived at 9:20 PM only to discover that we were the second group of people to arrive. Directed to stand at the helm of an invisible line, 40 minutes later from the gusty cold outside, we made our way into the warmth and scrambled, “pushing and shoving” to get front seats up top from the regal balcony.

While waiting in line for this movie, the movie’s magic had already started to unfold: the people. Scores of theater goers from the previous show had started spilling out into the street and then it was evident. This is no ordinary movie. This was a hearty cultural celebration of a long awaited arrival: like a family member you had been waiting for, for a long time, but who never got the chance to visit you till now. Some were screaming “Wakanda” (to my ignorance I asked Alex, “what/who’s Wakanda?” Alex blinked (probably feeling sorry for me) and patiently explained)! Others posed outside with arms crossed in X’s and used their calf muscles to jigger up and down in unison, hinting at something that was probably from the movie. Several had worn beautiful, vividly eye catching African cultural attire while a few more donned Black Lives Matters-like attire and other additions that evoked the Black Panther movement. The diversity of the audience that had arrived to behold this feature film was deliciously refreshing. It felt like a special night, not your regular. I couldn’t even imagine what it must have been like to be at a larger venue tonight. I heard South Africa’s premiere was lit!

And don’t even get me started on the row behind us, that had a hilarious supply of running commentary to dish out throughout the movie (imagine 7 loud Kevin Harts of all sexes sitting behind you with all that sass) – never have I enjoyed someone else speaking while a movie was on as I did this night. 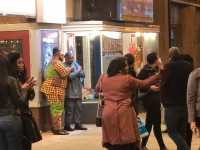 So now to the movie. I know, I know. I’m doing it a bit different this time – why not? Instead of being too technical I’m just going to go straight to the point. Go watch it. This is one of Marvel’s best yet. I had known this would be good given the positive critic buzz that had surrounded it. I read none of them going in; I even refused to watch the detailed trailers – although Roshni politely reminded me that I had actually seen the initial trailer during “Thor: Ragnarok” (2017). Even if this movie sucked, if you follow Marvel like a tail you’d have no choice. But the advantage here is that you can do it without having to endure anything but (most likely) blissful pleasure. My only tip is don’t go into this watching the trailer for “Avengers: Infinity War” (2018). 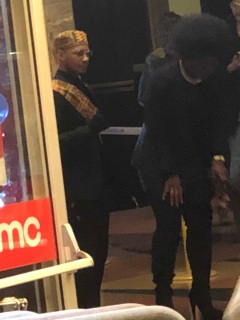 Chadwick Boseman (T’Challa/Black Panther) is an excellent choice; good God are you going to fall in love with that accent. He’s got the superhero makeup fit for an Avenger pinned with a relatable sense of humanity – what more could you ask for? Him, accompanied by his other star cast members, Lupita Nyong’o (Nakia) and Danai Gurira (Okoye), only work to solidify a pretty solid lead. Okoye’s action chops make her the most bad-ass General you are ever not going to want to come across, ever. Martin Freeman (Everett K. Ross), like an anachronism out of the Hobbit, is also here, although in my humble opinion he seems a bit misplaced (like he acts for much of the movie), but that could just be me. Having him accompany the leads almost feels like a tact-on “let’s have some White person also play a good person role to not make this be about race and stereotyping”, but that could just be my interpretation! Just saying.
What was also most tasteful about the movie is the humor, or lack of it compared to recent Marvel flicks. More recent films like those with Thor and Dr. Strange tend to rely a lot on humor which was quite successful for them. “Black Panther” on the other hand is scarce with its use of humor, but when used, it dishes it with lethal doses of laugh-out-loud commentary and sheer unexpectedness. You first gawk because you weren’t expecting it, but then find yourself thoroughly appreciating it. Very sharp writing by Ryan Coogler (also the Director) and Joe Robert Cole.
In terms of general plot and story line, we tend to have a pretty good, unseen story line and setting. There is a sense of inner duality and an almost conflicting sense of side-taking for us (i.e. who should you be rooting for) which is a good thing. I also loved that the narrative didn’t remove us from Wakanda as much, instead of threatening world destruction like every other major super hero flick these days (cough* DC and Avengers). Though there is a narrative that hints at a larger stake, Coogler is apt to never lose sight of the true gem he’s found onscreen that the audience has come to be mesmerized by – Wakanda. The racial political overtones onscreen are also not too vague for us to decipher the key messages and are aptly timely given our current political context. Some tropes, however, like what befalls the hero physically (I’m trying not to spoil anything here) are a bit cliché though because, really, we’ve seen that sequence a thousand times so we could have expected more there. Think Moses. However, given that much of the movie is pretty different, refreshingly forward, and surprising, we can be forgiving.
A truly solid watch. We give “Black Panther” a very well earned, non-surprising, 8.9/10.Adieu.