Godzilla is the only thing good about “Godzilla” (2014). The Guardian’s Paul Mainnes etches it brilliantly when he writes “at least they got the monster right” for his opening line. The trailer teased; the film teased even more. Too many times we were taken to the edge of the cliff, always at the cusp of glimpsing the legendary kaiju, and then forced to look away into darkness. Seductive is the spectacle’s enormity, and the anticipation of the gaze. The larger-than-life scale of the movie, with a budget of over $160M, commands a mouth-opening awe from gawkers like us: the tiny individual tots that look up greedily with necks craned like wide-eyed New York City tourists bewildered only by greatness. 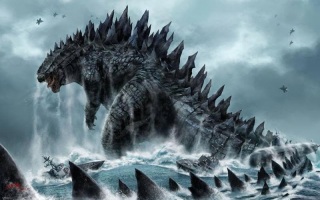 It begins with historic flashes of atomic milestones followed by spots of folklore and legendary sightings of the prehistoric King of the food chain. Directed by Gareth Edwards, and starring Aaron Taylor-Johnson (Ford), Ken Watanabe (Dr. Serizawa), Elizabeth Olsen (Elle) and Bryan Cranston (Dr. Joe Brody), the story stretches open with Dr. Brody’s conspiracy drenched hunches. The truth-knowing scientist is on a mission to unveil government secrets and go behind the long list of past nuclear test cover-ups. His son, Ford, grows up to lift the weight of the movie, becoming the designated Hollywood heartthrob whose sole aim is to keep alive the unrelenting agency of Man’s perseverance against adversity. 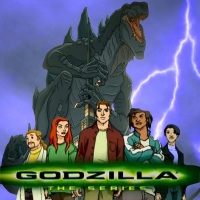 Excavated from Ishiro Honda’s 1954 film “Gojira”, this present day rendition has the creature from the legends shaken and woken from his deep cozy sea bed, but not alone. No sir, instead, he is joined by Massive Unidentified Terrestrial Organisms (MUTOs) that have their own separate agendas for survival. Godzilla awakes, knows his mission, and heads to location after location—Tokyo, Hawaii, San Fran and Vegas, all perfectly crowded metropolitan areas, to devastate and save. But this Godzilla, to our delightful surprise, has a more complex role (as complex as you can thrust upon on a gigantic swimming mutant dinosaur-dragon). What I liked most is that it all rips into a different storyline, reminding one of that 1998 cartoon series which aired on Fox—“Godzilla: The Series” where Godzilla has an affinity of sorts with the humans.

While the 1998 version that starred Matthew Broderick gave us a Godzilla that was almost stealthily graceful, looking more like a limber Tyrannosaurus rex magnified by 10, Edward’s beast is different. More loyal to the origins, he is reminiscent of those Japanese versions we can instantly recall from back in the day: bulkier in the stomach, stockier in the body, while smaller and boxier in the head. The meticulous CGI, expended in reviving him, is fantastic. His menacing look is what terrifies and also entices us. It really is a misinterpretation, stemming from our own biases, to judge what good and bad looks like with first impressions. While we know that Godzilla is a metaphor for the humanistic and environmental repercussions of nuclear acts of the past, the paradox of fascination and terror intertwine tightly. The etched scars of ancientness are evident on his aged face, allowing him to exhibit a prehistoric terrifying magnificence, spurred by human contamination. If one thing is for sure, he certainly doesn’t seem thrilled about being woken up by them MUTOs—we know. 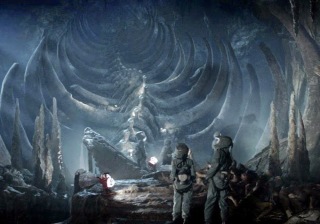 Thick in the point-of-view filming, there is so much of veiled storytelling it’s almost as if the movie is concealing him till the very end—which both works and frustrates. Most of what we get to see are from the eyewitness accounts of the characters. For audiences who only want to see the beast all the time—prepare to be left hungry and shivering in the cold. For viewers wishing to be titillated a bit more by multiple moving pieces of the movie, they will find this rendition to be entirely fulfilling, an all you can eat buffet of kaiju destruction. 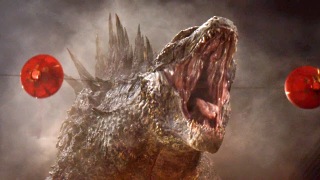 Acting, however, is a stale claim. Quite frankly—atrocious! The screenplay was partly to blame alongside the upset of seeing amateur acting from a well-seasoned cast. Elizabeth Olsen. Her vacated performance made me want to punch myself—the only way any sinew of emotion could arise from that deadpan recital. Overacting subtleties and underplaying tantrums, Olsen was painstaking to watch. For an army wife robbed of physical love and a mother threatened with the loss of her son, she delivers seething with misdirection. Real emotion arises from innate expression, timed to reaction, not falsified cringes, chokes and whims that kill any semblance of verisimilitude. Closely followed for “just stop, please!” acting that was equally as bad was the doddering Wantanabe. I had the utmost respect for him until I saw this stroke-inducing display, pumped even more by his frazzled ever gawking assistant Vivienne (Sally Hawkins). Can someone please jab Wantanbe with some adrenaline for Godzilla’s sake? All he appears to do in this movie is unhelpfully mumble gibberish, say “GOJIRA!” once, and stutter some more. 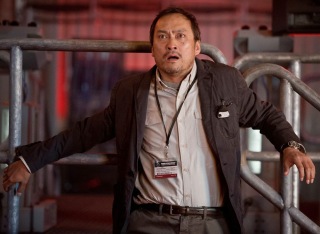 Kick Ass’s Taylor-Johnson on the other hand gives a somewhat mediocre performance. Not extraordinary but nothing to be too reproachful of. He does what he is told to. Some heroes drag us through their movies to ensure we meet the rolling credits at the end, and other heroes step beyond our expectations by immersing us in novel experiences, broadening our understandings while accompanying us to the end. This was the former.

With all this barbed commentary you must wonder why I will give what I give this movie. The only reason I rate this above average is because the movie saves itself and pays off. It starts slow and ends with a blow; a blow that leaves your hair on ends. The final battle is aesthetically rich and indulgently active on many levels. One example is when Edwards, as per his own commentary, touches deftly on Danté’s Divine Comedy for the High Altitude- Low Opening (HALO) shot of angels (the army) descending to hell (an apocalyptic San Francisco). With chokingly thick cloud cover, and ominous doom in the air, it makes way for splendid cinematic storytelling. The suspense is heightened by the shadows of the unknown and limited range of vision in the dark. We feel lost, and individually lonely, in a world of giants: be they skyscrapers or beings.

Conclusively, there is nothing much to say but that it is Godzilla who comes chomping through, pulling badass electrifying surprises and on the fly moves left right and center. He makes you cheer and get cozy in your own excited goose bumpy skin as you watch. Godzilla is so good he could live up to our dreams of the epic ideal, but isn’t allowed to in this movie by the limitations of an overly drawn out screenplay. But for Godzilla’s sake alone, “Godzilla” receives a complimentary 7.0/10. He alone is too cool not to see. Adieu.